Across the globe, increased Internet use will fuel new growth in the Global Networked Economy. Mobile Internet users will create new demands and expectations for mobile networking infrastructure. This ongoing growth trend is highlighted by the adoption and use of mobile applications (apps).

Fifth-generation (5G) wireless communications will support more than 10 percent of the world’s mobile connections by 2023, according to the latest Cisco Annual Internet Report. The average 5G speed will be 575 megabits per second or 13 times faster than the average mobile connection.

For the past 50 years, each decade introduced a new mobile infrastructure technology with cutting-edge innovations. Mobile bandwidth requirements have evolved from voice calls and texting to ultra-high-definition (UHD) video and a variety of augmented reality or virtual reality (AR/VR) applications.

“What we are seeing from our research is a continuous rise in internet users, devices, connections, and more demand on the network than we could have imagined,” said Roland Acra, senior vice president and CTO at Cisco.

​The ‘Cisco Annual Internet Report’ covers mobile, Wi-Fi and fixed broadband networking with quantitative projections on the growth of users, devices and connections as well as network performance and relevant trends over a five-year forecast period (2018 – 2023). 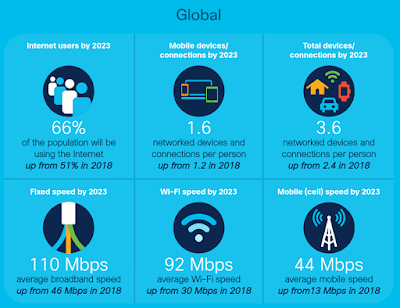 Global devices and connections projections by 2023

In summary, the Cisco Annual Internet Report is a global, regional and country-level forecast with an analysis that assesses digital transformation and is developed by the same analyst team that created the Cisco Visual Networking Index (VNI) Forecast. This new report offers numerous insights to help organizations anticipate the trends that shape investment in digital business research and development.

Why storm surge is so dangerous