With the looming threat of Covid-19 forcing tracks across the country to close their doors to fans, it wasn’t long before the major sales companies followed suit, making the difficult decision to either postpone or cancel their upcoming two-year-old auctions.

But on the Ocala Breeders’ Sales grounds on Saturday, everything looked to be business as usual. With the third and final day of the under-tack show underway, the stands were filled with the comings and goings of buyers, consignors and bloodstock agents shopping the March Sale of Two-Year-Olds in Training with the hope of getting a jump on what is sure to be an unorthodox season.

“I think if you’ve a two-year-old in your barn right now, you’re sweating bullets,” said consignor Cary Frommer, who pinhooks yearlings to two-year-old sales along with her partner Barry Berkelhammer. “It’s an interesting situation, but in the big picture, we aren’t the only ones suffering. We just have to make the best of it.”

For many consignors and pinhookers at the central Florida auction, future plans for this season’s crop of juveniles were altered drastically over the past week when Keeneland announced it would cancel its April Two-Year-Olds in Training and Horses of Racing Age Sale, while running at least the first two weeks of the spring meet spectatorless.

Fasig-Tipton followed suit soon after with the decision to cancel The Gulfstream Sale, its select two-year-olds in training sale held at Gulfstream Park that was set for April 1. The announcement was made by Fasig-Tipton and the Stronach Group after the South Florida track’s live racing was closed to the public until further notice.

With two auctions stricken from the calendar and the continued uncertainty of a virus that has no expiration date, consignors have to retool their sales strategies in order to move horses before midsummer, when buyers traditionally shift their focus from juveniles to yearlings.

“Obviously, what is happening with the shutdowns, everyone has been affected,” said bloodstock agent Jamie McCalmont, who is among a swath of international and domestic buyers attending OBS March.

“It’s important that all of these horses are moved on by the first of July, or it can mess up the whole financial system. It all feeds into each other, and if these horses aren’t cleared, people might not have the money to go and buy yearlings.

“You really have to give props to OBS. Times are not easy, and you have to take your hat off to them to keep this going. All the advisers are here for their buyers, and buyers don’t really have to be here, so why not have the sale? I think they’ve done a great job keeping the whole thing going.” 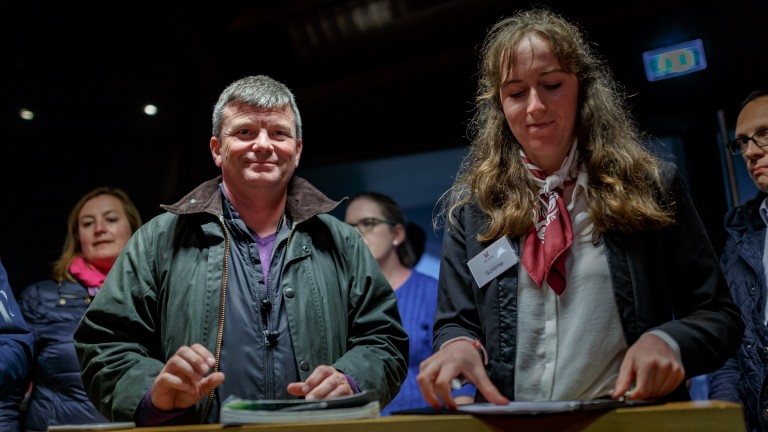 Jamie McCalmont: “You really have to give props to OBS”

“We’re still going to move our horses catalogued to the cancelled sales to other sales. Hopefully, the buyers will respond by going with us to those other sales knowing those are our best horses to sell, so we can get paid for them,” said Torie Gladwell, who owns and operates Top Line Sales with her husband Jimbo Gladwell.

“Half of our horses will end up going to the OBS April sale, and the other half will go to Maryland Midlantic Sale so that we can spread them out a little bit.

“We’re just worried that the economy isn’t going to rebound by the April sale, where there will be 1,200 horses to sell. That’s in the back of all our minds right now. Hopefully, everything will calm down in the next couple of weeks and let the market level off so it can start coming back.”

The effects of a declining stock market are sure to play a role in next week’s auction. Gladwell, along with Frommer and others, said the horses they can’t sell through the ring will likely be offered privately to clients not attending the sales. The hope is those transactions will help generate income as well as free up space in the event of further delays.

“It’s obviously disconcerting, but the whole world right now is in a precarious place,” said Frommer, who has four horses entered in the March sale. “Personally, it’s hard to have horses coming up and ready ahead of the sale and then have to back them off and readjust everything. I’d like to try and sell some privately and then hopefully make the best of our situation, like everybody in the world is having to do right now.

“Economically speaking, I’m not nearly as worried. I think the stock market is reacting like we would expect it to with these things happening right now. I think that will bounce back and we will ultimately be fine, but I think that that will come back much faster than our whole lifestyle will. We have to regroup and go to the next place. Hopefully, everybody will stay sound and safe while we’re dealing with this – the horses as well as the people.”

Over 500 horses are set to sell during the March 17-18 auction, and Gladwell is hopeful that more buyers will venture to OBS to take advantage of the stock that is both ready to sell and ready to race.

“I think most people are going to be here and do their homework. This is what they do for a living, so what else are they going to do?” she said. “The majority of them will be here, and I will expect trainers to come in after this weekend.

“I don’t expect a whole lot will change other than people will obviously be taking extra precautions. Hopefully, the market will stay strong. There are some really good horses here, and the ones that have stepped up and performed, I think they will sell really well. I think it will all be okay. I know some people are panicking a little and saying, ‘Sell everything, it’s a buyer’s market,’ but I’m pretty optimistic.”

For more news on US racing, sales and bloodstock news visit bloodhorse.com